One of the most confusing things about Cisco ASA’s is the licensing structure. While it is very nice to have a single train of OS files to deal with, it is incredibly hard to keep track of all of the licensing details regarding the ASA. Here is a handy guide that may help you wade through the piles of documentation around it. 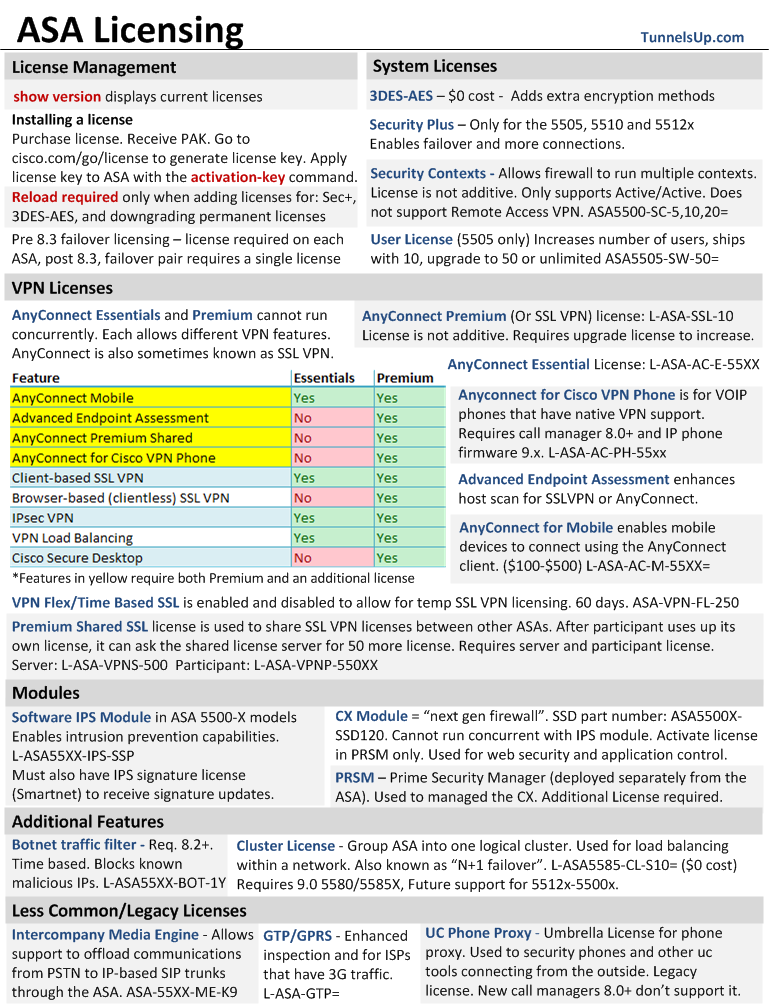 To see what licenses are installed on the ASA review the outputs of the show version command. The output will look something like this:

Now we will cover each of these items in detail.

On the Cisco ASA 5505 you may see a line stating:
VLANs : 3 DMZ Restricted On the 5505 each interface is assigned a VLAN. This is stating only 3 VLANs can be created which are then eligible to be applied to an interface. The “DMZ Restricted” term indicates a further restriction. Two VLANs can talk to each other without issues. Suppose these are “inside” and “outside”. The 3rd VLAN we’ll call “DMZ”. The DMZ interface is restricted to only be able to pass traffic to either the inside interface or outside but cannot pass traffic to both. That means it’s “DMZ Restricted”. A sec plus license can be applied to remove this restriction.

This is “Unlimited” in all models except for the 5505. The 5505 comes with 10 hosts standard and can be upgraded to 50 or Unlimited number of hosts. This specifically means the ASA will only build connections for 10 hosts within the network at a time.

This is not to be confused with “Clustering”. Failover is when two firewalls (which are matching models and hardware) are paired together for redundancy. In an Active/Standby scenario, one firewall acts as the active one and accepts connections going through it. The active firewall will keep the active IP. So if the primary firewall goes down, the standby unit will kick over to active and even take over the active IP. This failover usually occurs without dropping a packet because the connection table is actually replicated between the two units.

Encryption-DES comes standard on all firewalls.

Encryption-3DES-AES is a $0 cost license that enables 3DES and AES encryption methods.

By default the ASA has 2 contexts that can be ran simultaneously. This is not supported in the 5505 and requires the Security Plus license for 5510 and 5512-X.

A multi context firewall is one which runs multiple separate firewalls inside a single chassis. The admin context is used to determine which interfaces are assigned to which contexts.

Advanced Endpoint Assessment is used to enhance the host scan. When normally a host scan can detect when a VPN user is out of compliancy and not allowed conection into the network, the Advanced Endpoint Assessment can actually suggest to the user what they’ll need to do to fix it. Either by downloading an update or guiding them on fixing a program.

AnyConnect for Cisco VPN Phone is used for allowing VOIP phones that have built in VPN support to VPN into the ASA and then contact the Call Manager. Only supported on CallManager 8.0+ and IP Phone firmware 9.x.

For more information on the botnet license and capability see my blog post Understanding Botnet Licensing.

This is used by ISPs who have 3G traffic going through their network.

The Shared SSL VPN license is a way to have a central ASA act as an AnyConnect premium peer license server and other participant ASA’s can ask for licenses (in blocks of 50 at a time) from the shared license server. This requires both a Server license and particpant license.

This is a legacy license because CallManager 8.0+ does not support this feature any longer.

Allows support to offload communications from PSTN to IP-based SIP trunks through the ASA. Primarily used for business to business federation between CUCM’s. Requires version 8.3(1)+.

In ASA 5500-X series firewalls the IPS module is entirely software based and requires an additional license to enable it. Once the license is enabled for the software firewall, and additional support contract (smartnet) is required to update the IPS sensor with signatures.

This feature is new to 9.0(1). It allows multiple ASA’s to be grouped into a single logical device. Clustering will probably never be supported on the ASA 5500 series models. It currently is only available on 5580 and 5585-X models. Future plans to support all 5500-X models.